Aliceblue? Rebeccapurple? Peru? Why is “darkgray” lighter than “gray”? And doesn’t it feel weird to write “color” instead of “colour” all the time? CSS colours are freaky.

A few months ago, I started getting pretty hard-core into CSS. I was testing a bunch of new tricks, all the while assigning different colours for different elements. And like many CSS enthusiasts, I started noticing really bizarre pre-set colour names. Rebeccapurple – what? Peru – huh? Navajowhite? Woah woah woah, what’s going on here?

It was only when I spoke with a seasoned developer that I realised some of these colour names have stories behind them. The gist of one of the stories he told me went a bit like this: there once was a little girl named Rebecca – the sick child of a skilled programmer, and she really liked a particular shade of purple. Sadly, she was suffering from brain cancer, and passed away shortly after her sixth birthday. As a result, the authorities of CSS conventions decided to remember her by dedicating a colour to her, and calling it rebeccapurple.

I found this story fascinating! I’d spent so much time with CSS colours recently, and I had absolutely no idea that the code I was typing had so much depth! I decided to look into some of the other strange CSS colour names. Here are some of interesting highlights from my research!

Rebeccapurple: As mentioned above, this colour was named after a girl who died very young. There is a touching story written by someone close to her here: http://meyerweb.com/eric/thoughts/2014/06/19/rebeccapurple/

Aliceblue: Alice Roosevelt Longworth (the daughter of Theodore Roosevelt – one of the presidents in the US some decades ago) really liked this shade of blue. She wore a light blue dress at a special event, and inspired an “alice blue” fashion trend in the states. In 1919, a song called “Alice Blue Gown” also became very popular. It was presumably inspired by this fashion trend!

Papaya whip: Apparently, if you blend papayas with vanilla ice cream, it produces this colour. I’m not a big fan of papayas, but the description sounds delicious!

Dodger blue: The Dodgers are a baseball team that are based in Los Angeles, California. This colour is named after the light blue used in Dodger Stadium (strangely, not the same shade of blue used on their uniforms).

Goldenrod: It’s a family of plants! They’re yellow, and bloom in late summer. Their colour is a lot like the colour of dandelions… Might be best to see for yourself! 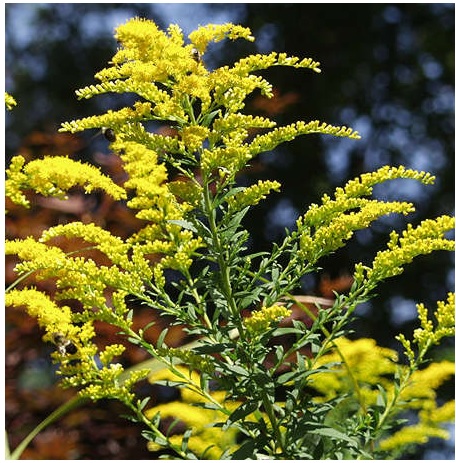 Navajowhite: The name for this colour allegedly comes from its similarity to the colour on the Navajo Nation flag. In case you’re as newb as I am – Navajo Nation is a part of South-Western United States that spans over 70,000 square kilometers of land! Navajo Nation is huge!

Indianred: I asked a couple good friends with art backgrounds what they felt when I told them this was a colour name in CSS. They both avoided saying anything, and I get the feeling they were trying to avoid conflict. That makes me feel that this is a pretty controversial colour, no matter what encyclopedias and the internet say. And what exactly do the encyclopedias and internet say? It turns out that Indian red comes from a reddish type of soil found in India. This “red laterite soil” is rich in naturally occurring iron oxides, which gives it a deep red. Interesting, to say the least…

Peru: Okay, so I couldn’t find out why this colour is called Peru. I looked at the flag… Nope. I googled “history peru”, and saw a bunch of Inca temples… but I was probably barking up the wrong tree there. Peruvian textiles… Maybe? There is evidence that people have been making textiles in Peru for over 10,000 years, and if you look at a stack of different textiles, they combine into a mosaic of different colours, possibly trending towards an earthy-brown?

When looking into the history of CSS itself, I found that some of the colour names come from a system called X11. While creating X11, one of the employees in charge of deciding colour names just referenced some Crayola crayons he had on hand. This was in 1989, so some colour names that were PC then aren’t exactly as PC now.

And that makes me think: if you introduce a standard to some part of the internet, is it there to stay, as different aesthetics and programming languages build on it? As our culture changes over the years, what will be the next commands/properties that seem wackily anachronistic? Time will tell, I suppose.